One day I was doing some important DIY work at home until late evening, and needed a flashlight to search for some tools in my Shed in the dark. Unfortunately I had misplaced my iPhone on this day, always being the first! Now given I also wear an Apple Watch I started thinking, Does an Apple Watch have a Flashlight?

One of the most frustrating situations I hear, are moments in the dark where you badly need some light and you just don’t have it with you when you need it most. So with this in mind, I began exploring & researching into the Apple Watch deeper for the answer. Apple Watch does have a Flashlight that is included in all Series of the wearable device, providing it is running watchOS 4 or Newer. So when I made the discovery that the Apple Watch does have a Flashlight, I was very quickly able to find the tools that I was searching for on this day. Since I made the discovery, I was keen to explore the Apple Watch Flashlight feature even further to the point I can use it at its full potential and really benefit from it. So lets dive deeper on what I found.

What is the Apple Watch Flashlight?

The Apple Watch Flashlight helps you with endless ways in which it can be used in your everyday life. This includes anything from finding objects, acting as a support light for completing work in the dark or just to make other people aware of your presence. The function can be accessed by swiping up the Control Center and then tapping on the Flashlight icon. Lets look into what more can this feature offer and how does it work.

The Apple Watch Flashlight is simple to use and easy to access when you needing it most and which can help act as your ultimate handsfree backup Light regardless of whether you are at your Home, Office, Park, Shop or just out and about travelling places. Sounds great, when you know a small feature can give you so many benefits right! So lets find out more about how the Apple Watch Flashlight works and the different modes of Lighting you can benefit from. But before you continue reading I like to share a quick little Personal Experience of the Flashlight feature below.

I myself own an Apple Watch Series 5, where I have used this feature countless times and I must say the Flashlight has helped me in so many situations like fixing a pipe under a floor board, or finding my Gym Bottle in a bag or looking for my Wallet that made its way under the sofa. Whatever the situation, I have found the Flashlight much more convenient and hassle free, when using the Apple Watch in comparison to using the same feature on my iPhone. What’s more! The feature works even better on the Apple Watch than on the iPhone, as it offers the user an extra benefit that the iPhone just cannot do.

How does the Flashlight work on the Apple Watch?

Lets find out below what this looks like in a step by step format with pictures: –

STEP 1: Home screen Unlock – Please ensure the Apple Watch is unlocked before using this feature. You will notice the screen below if you need to unlock the Watch before going to Step 2. If not required, please proceed to step 2. 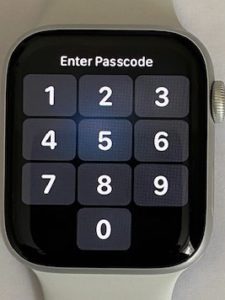 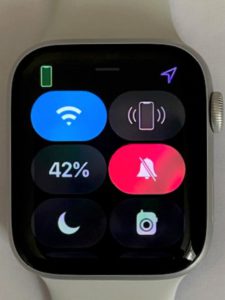 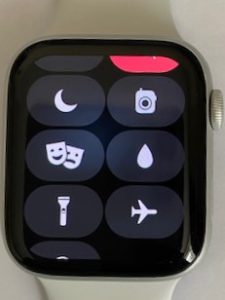 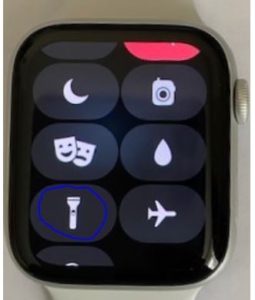 STEP 5: Apple Watch Displays the Flashlight – And here we have it! Once step 4 is done you will see the Full screen of the smartwatch filled with Bright White Light shining from it as shown below: – 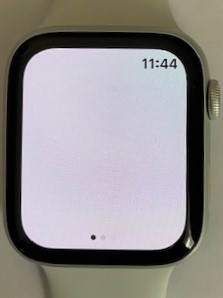 STEP 6: Close the flashlight – When you have found your lost item or completed your work, simply Swipe your finger on Screen from Top to Bottom and you will Close the Flashlight within less then a second. Its as easy as that! Alternatively you can always press the Digital Crown to also dismiss the Light.

What are the different modes of the Apple Watch Flashlight?

The Apple Watch Flashlight function, consists of 3 different modes of what I call Flash Lights. Depending on the reason for using the Flashlight, the feature can be set to the appropriate mode. The 3 modes you can set the Flashlight to, are as follows: –

Still White Light – This is the common mode of the Flashlight that you would general use on the Apple Watch. It is the Default mode the Flashlight is switched to when the Flashlight turns on. This mode of Light will mainly be used to find objects around in the dark, regardless of whether you are in the Garden, Home, Office or anywhere else. 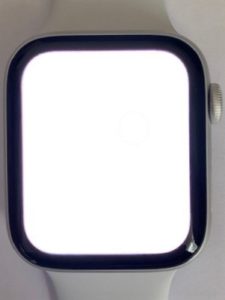 Flashing White Light – This is the 2nd mode you can use and is generally used to make people aware of your presence. The Light will Flash Black If this flashlight mode is turned on, then the most common use found of it is usually when Cycling or Biking on the road in the Dark. By turning the Light on, you can use your Apple Watch to make other Road users aware of your presence. 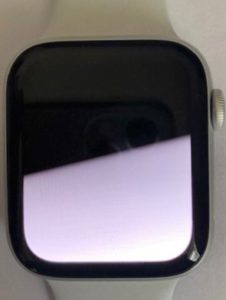 Still Red Light – This is the 3rd mode you can use and is generally used where you require enough light to get around but not prominent enough that disturbs other people around you. I find that this mode is more beneficial in inconvenient moments, like going to the Bathroom without disturbing your Partner or your child from their sleep. 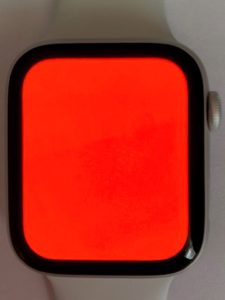 How can we change the Flashlight modes on the Apple Watch?

How do I get the Flashlight on my Apple Watch?

But for the Series 1 and 2 that did not have it originally, I simply carried out the Software update onto these smartwatches to Watch OS 4 and there we are! The Apple Watch Series 1 and 2 now also had the Flashlight function running perfectly fine.

How bright is the Flashlight on the Apple Watch?

For this reason the Brightness will be noticeably less brighter in Series 1 compared to all other versions of the Apple Watch. Also with regards to the Brightness in general, the Flashlight on the Apple Watch is very Bright for what we intend to use it for and which automatically switches from displaying Dimmer when facing it and Brighter when turned away from your visibility.

The Apple Watch Flashlight function can also be customised to the darkness around you at a given time, especially when you find yourself around lots of other people. So for example lets say you are out in the Cinema watching a Movie and you find yourself needing to get out of the Screen you’re in, to grab more Popcorn.

In order to come out causing minimal disruption to anyone, you can simply tap the Movie Theatre icon on the Apple Watch Control Center and then when needing light just tap on the Flashlight function as mentioned above. Which will automatically switch to the Red Light Mode instead of the Default White Light mode, allowing you to get around with less disturbance to others around you.

Hope you found this Article helpful. Please comment below on how useful you found this article or alternatively let me know if you have any other question on the Apple Watch Flashlight Function. Please share this article with anyone else that you may feel can also benefit from this information.

link to Apple Watch Internet - Browse the Web on your Wrist

The Apple Watch has been around in the market for some years now, continuously evolving in numerous new features which you can take advantage of. Year after Year and Release after Release. Right! But...

Have you ever wanted to experience the world of Lucid Dreaming in your sleep, but have been let down by the methods and tools that just have not proven to be effective? If this sounds like you, then...